He was wearing a Simple Plan t-shirt they would play at the show too , baggy black skater pants, black nail polish and a little eyeliner AN: A lot fo kewl boiz wer it ok! We walked into his flying black Mercedes-Benz the license plate said and flew to the place with the concert. 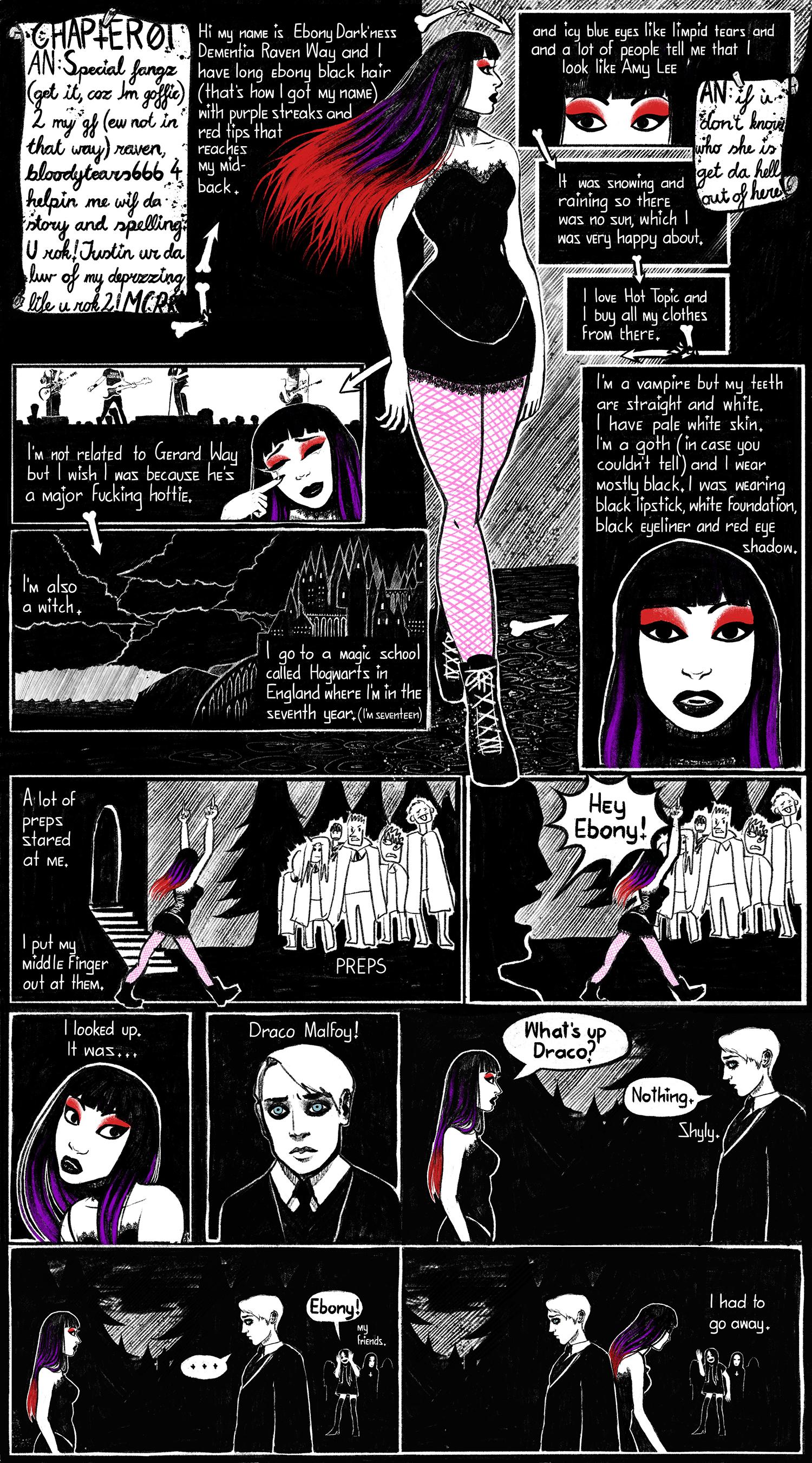 On the way we listened excitedly to Good Charlotte and Marilyn Manson. We both smoked cigarettes and drugs. When we got there, we both hopped out of the car. We went to the mosh pit at the front of the stage and jumped up and down as we listened to Good Charlotte. I fucking hate that little bitch.

The night went on really well, and I had a great time. So did Draco. After the concert, we drank some beer and asked Benji and Joel for their autographs and photos with them. We got GC concert tees. I walked out of it too, curiously. And then…………… suddenly just as I Draco kissed me passionately. Draco climbed on top of me and we started to make out keenly against a tree. He took of my top and I took of his clothes. I even took of my bra.

Then he put his thingie into my you-know-what and we did it for the first time.

PS im nut updating umtil I get five good revoiws! I started to cry tears of blood down my pallid face. Draco comforted me. When we went back to the castle Dumbledore took us to Professor Snape and Professor McGonagall who were both looking very angry. Everyone was quiet. Very well. You may go up to your rooms. When I came out….

We hugged and kissed. After that, we said goodnight and he reluctantly went back into his room. The next day I woke up in my coffin. I put on a black miniskirt that was all ripped around the end and a matching top with red skulls all over it and high heeled boots that were black. I put on two pairs of skull earrings, and two crosses in my ears. I spray-painted my hair with purple.

In the Great Hall, I ate some Count Chocula cereal with blood instead of milk, and a glass of red blood. Suddenly someone bumped into me.

All the blood spilled over my top. I regretted saying it when I looked up cause I was looking into the pale white face of a gothic boy with spiky black hair with red streaks in it. He was wearing so much eyeliner that I was going down his face and he was wearing black lipstick.

He had a manly stubble on his chin. He had a sexy English accent. He looked exactly like Joel Madden. We sat down to talk for a while. Then Draco came up behind me and told me he had a surprise for me so I went away with him. AN: wel ok u guyz im only writting dis cuz I got 5 god reviuws. Draco and I held our pale white hands with black nail polish as we went upstairs. I was wearing red Satanist sings on my nails in red nail polish AN: c doez dat sound lik a Maru Sue 2 u? I waved to Vampire. Dark misery was in his depressed eyes. I guess he was jealous of me that I was going out with Draco. Anyway, I went upstairs excitedly with Draco.

We went into his room and locked the door. He went unda da invisibility cloke and started to meow loudly. Den he heard Filch meow. Filth nodded. Voldemort: If thou doth not kill him, then I shall kill him anyways! It turns out that Darkness, Diabolo, Crab and Goyle's dad was a vampire. He committed suicide by slitting his wrists with a razor.

He had raped them and stuff before too. They all got so depressed that they became goffik and converted to Stanism. Hermione was kidnapped when she was born. Her real parents are vampires and one of them is a witch but Voldemort killed her mother and her father committed suicide because he was depressed about it. She still has nightmares about it and she is very haunted and depressed.

You can come to my room tomorrow and you can do it. This is unnecessary, but seriously, you guys have got to read this bit. He was hung like a stallone and all that. He was hung lik a stallone. He had replaced the Vampire tattoo that said Enoby on it. Black roses were around it. I gasped. He lookd exactly lik Gerard Way.